Liam Kelly may have been the last to walk upstairs into the area where his AGW colleagues were gathered following an historic first visit to the Portstewart Golf Club, and most-recently host venue to the 2017 Dubai Duty Free Irish Open.

Though when the points were added up it was Liam who was first in capturing the 2019 Presidents Putter.  Liam, playing off a handicap of 24, stormed home in the windy conditions to record 36 Stableford points.

Liam capped his round with eight ‘3-point’ scoring holes including four in succession from 14th to 17th hole and more amazing is that Liam failed to score on two holes.

Liam’s victory is the third by an Irish-born AGW member in four AGW matches on the Emerald Isle since the Association broke new ground in 2015 in taking the AGW matters Ireland/Northern Ireland.

Defending Presidents Putter champ, Neil McLeman was second with 34 points and, thanks to his good wife, arrived with the putter inside a lovely protective green cover.  And to say Neil was glad not to travel back home with the ‘heavyweight’ trophy is an understatement and also having been warned by his wife she did not want to see it again … the putter that is.

Neil did go very close to holding onto the trophy had it not been for not scoring on holes 14 and 17.

Brian Keogh was third with 33 points.

We had 15 AGW members teeing-up though there was 17 present as Scot’s Jock MacVicar and Nick Rodgers joined us for the day while the AGW was very delighted to welcome five guests in the R & As Clive Brown (Chairman, Championship Committe) and Mike Woodcock (Director, Corporate Communications), Leo Diamond, the Portstewart Club Captain, Michael Moss, the former long-time Secretary at Portstewart and Deric Henderson, who is assisting Royal Portrush ‘media-wise’  in the lead-up to The Open.

We had three nearest-to-the-pins prizes (winners listed below) and with one of those winners, Robin Barwick not only winning a bottle of Bushmills for his tee shot on the par-3 sixth but also holing the birdie putt.

Unfortunately, Brian McLaughlin birdied the par-3 third hole but there was sadly no ‘wee dram’ for Brian,and speaking of birdies Shane O’Donoghue managed two birdies (9th and 13th) during his round while Clive Brown, and a former GBN & I Walker Cup Captain, birdied the 7th.

A very special thank you to all those who made the effort to attend the media outing and a huge thank to Portstewart Golf Club in hosting the AGW and to the R & A/Northern Ireland Tourism in hosting the post-golf canape and drinks reception.

Everyone at the AGW is very grateful. 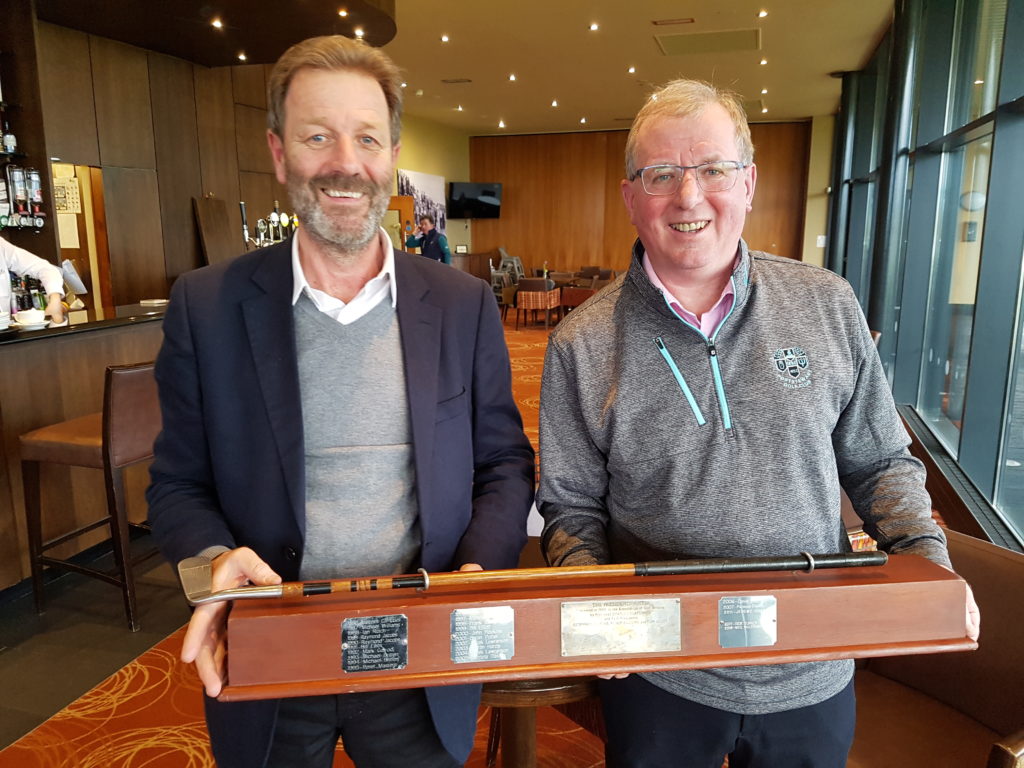 Liam Kelly storms home with 14 Stableford Points over his closing five holes to capture the AGWs President Putter with AGW Golf Captain, Peter Dixon (l) presenting the trophy.  Liam proudly wearing a Portstewart top as another of his prizes.

Nearest to the Pins