Twenty-four hours after Liam Kelly captured the 2019 Presidents Putter and Denis Kirwan made it an Irish one-two in securing victory in the R & A Salver at Royal Portrush.

Denis’ win is his second AGW title having captured the Michael Williams Hogget at Kirkeel in 2015 during the week of the Irish Open.

While Liam’s success was a third in four ‘Emerald Isle’ AGW trophy events, Denis has now made that four from five triumphs for ‘home soil’ born golfers.

There was 19 AGW members among the 52 players who teed-up on a truly spectacular 148th Open Championship venue, and on a day the first spectator seats were being erected behind the 1st tee and the 18th green.

We did get a few ‘spots’ of rain but thankfully the weather played it’s part as a stunning Royal Portrush unfolded at every turn.  There was also the welcome sight of the Union Jack flying above the halfway hut meaning the hut was open, and as the locals will tell you the worst sight on the course is to walk down the ninth seeing the flag being lowered.

For those who ventured inside there was hot tomato and basil soup, sandwiches and for a few brave souls, a glass of Bushmills.

Maybe Denis was one of those who sampled a ‘drop’ of the renowned local favourite because after going out in 13 points, he raced home with 21 points thanks to four ‘3-pointers’ and two ‘2-pointers’ over his back nine while he also had six pars over the 18 holes to win by an impressive five points with 36 Stableford points.

Dan Murphy and Mark Townsend shared a distant second place with 31 points and with Dan pulling off the shot of the day in snatching an eagle ‘3’ at the par-5 12th hole.

Mark was not to be outdone in making two birdies while RTEs Greg Allen got his round off to a great start with an opening hole birdie.

The AGW is indeed very thankful to the R & A in again helping host the seventh staging of the R & A Salver.

Also the AGW wishes to place on record our thanks to Royal Portrush for their arrangements and to the Northern Ireland Tourism in hosing a superb meal along with drinks following the golf. 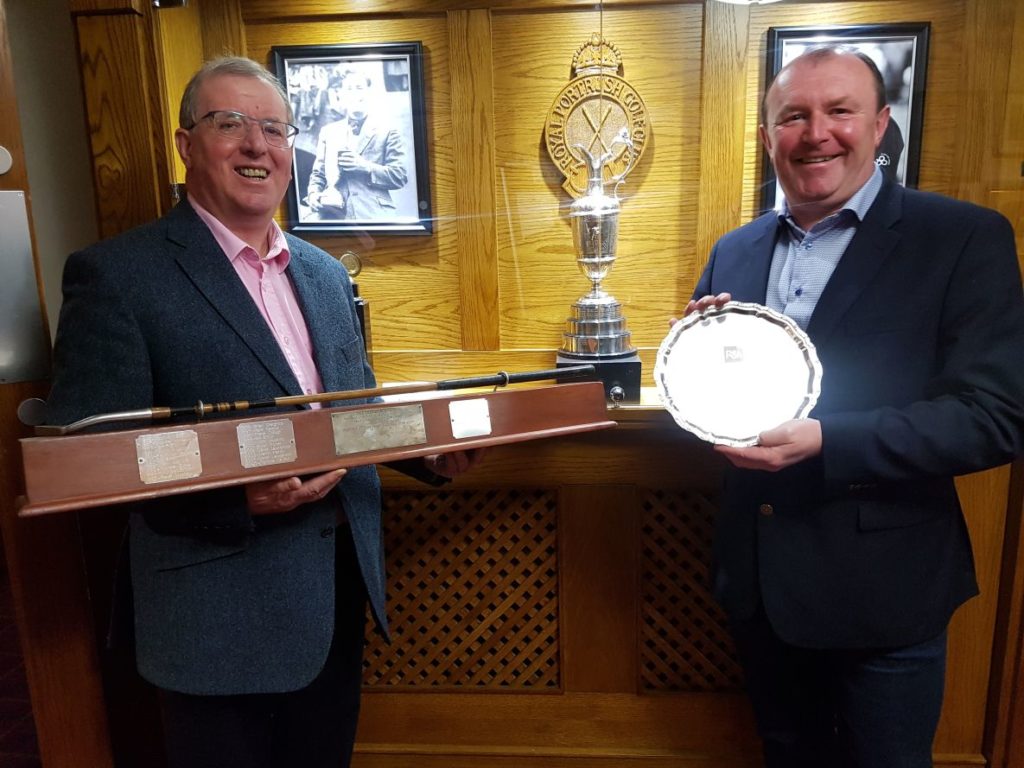