Stalwart AGW member Peter Godsiff celebrated his 80th birthday on February 11 with more than 70 family and friends turning out for a lunch at his golf club.
The former Bristol Evening Post sports editor who still writes on behalf of the PGA West was thrilled at the turnout – and the messages of support from AGW members.
Peter, a member at Farrington Park GC, Somerset, was thrilled at the turnout organised by his daughter Anna.

Former colleagues from his Bristol Evening Post days David Foot, Graham Russell and Alan King reminisced about the heady days before the internet when journalists were dependent on their contacts for stories.

The AGW extended a formal 80th congratulatory note to Peter on behalf of all members, and reminding Peter he celebrates his 80th the same year as the AGW also celebrates 80-years.

AGW members were also keen to add their messages of congratulations to Peter on his milestone birthday.
Peter thanked all the AGW members who had sent their best wishes. 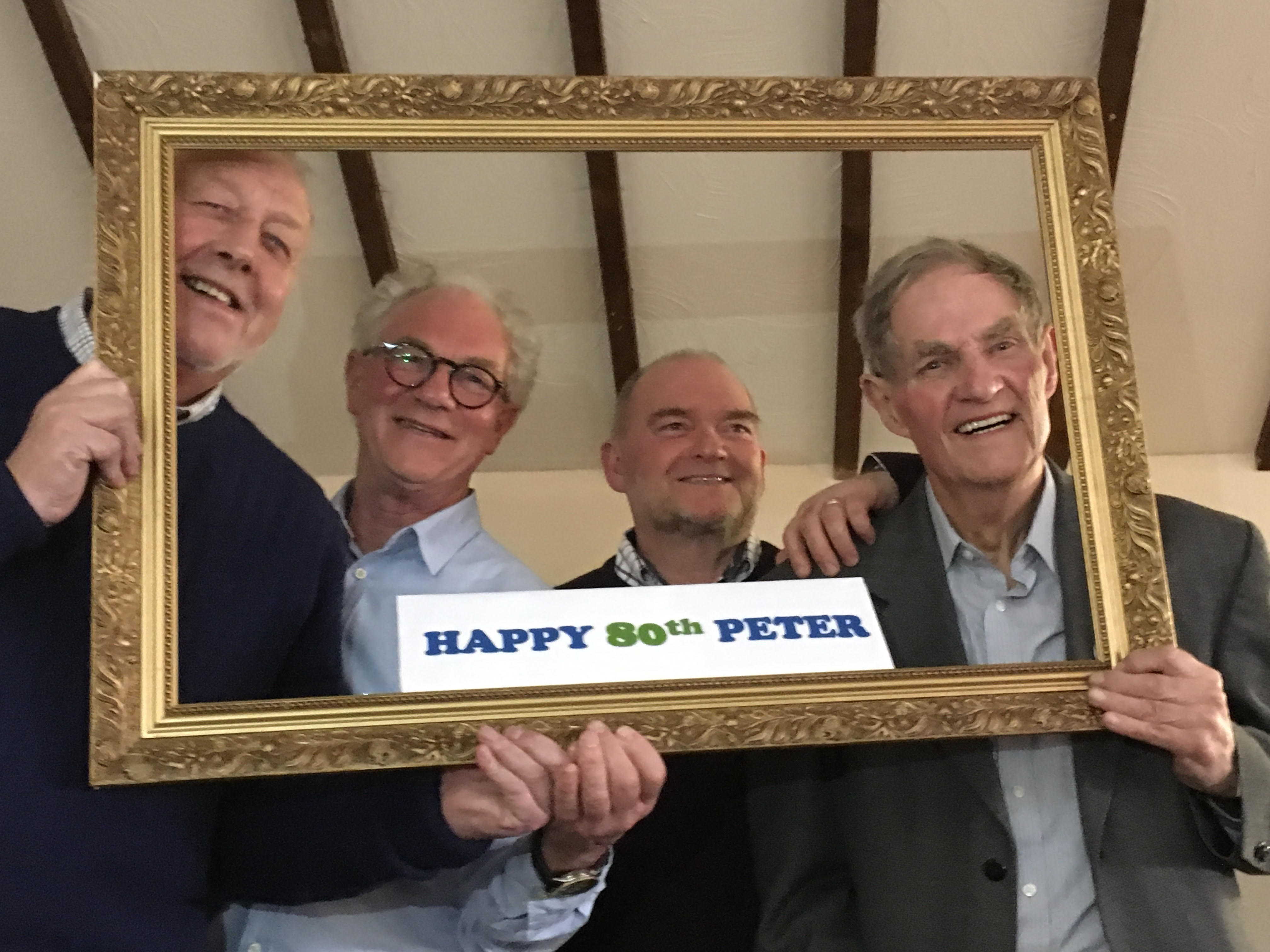 He said: “I’ve so many happy memories of time spent with AGW members so it was really special that so many of them messages on my special day. It’s humbling to think so many people still remember me.”

All the messages have been included in a commemorative book being put together by Peter’s family.  Members recalled how Peter, a former Race to Wentworth winner in 1997 who joined the AGW in 1996, was a regular at tournaments throughout the U.K.

While Alastair Tait remembered Peter’s unique performance on a par-5 while playing at a pro-am at Atalanta in Spain.
Alistair said: “ I played a lot of golf with Peter in AGW competitions, but one tournament still stands out. In the early 2000s, British golf writers were invited by the PGA of Europe to Marbella for an international media competition run in conjunction with a PGA pros competition. The event took place over three rounds at Atalaya Golf & Country Club.

“Preferred lies were in operations since it was winter, but with one unusual local rule. We were allowed to actually tee it up on the fairway, which allowed me to witness something I never thought I’d see in my golf writing career. Atalaya’s 17th hole is a par 5. Peter, as was his wont, hit the fairway with his tee shot but not very far. He teed up his ball for his second shot and pulled out driver and hit it up the fairway. He repeated he process for his third shot and his fourth, bouncing the ball just short of the green and rolling it up to 20 feet. You guessed it – he holed the putt for par to become the first golfer in the history of the game to make par on a par 5 with four drivers and a putt.”

Jeremy Chapman said: “I am delighted to have the opportunity to join in the celebrations for Peter’s 80th as we both came through throat cancer together in 2009. We had a lot of eating difficulties for a long time (mine still persist and in fact now rely on a stomach peg for sustenance) and lost a fair bit of weight.
We were a source of comfort to each other during that difficult period and he was a very caring friend and colleague. His gruff exterior masked a good heart. We were both nursed wonderfully by the most adoring wives, without whom I doubt we would have survived.
To reach 80 Peter has done brilliantly, golf and a love of life playing a big part in his survival. He’s not finished yet and, from a distance, I join in celebrating the birthday with you all. If I was allowed to, I would join you in toasting a good man with a hug and glass or two of champagne.
Have a great day, my old mate.”

Patricia Davies said: “Happy birthday Peter, many congratulations on reaching your 80th.  I am delighted to hear that you’re still going strong and hope your golf is acceptable – have decided that’s the best I can hope for at this stage but you may be more ambitious!
I always enjoyed our chats and thank you for sharing your experience and expertise so generously.”

Bob Davies said: “Well done on reaching 80 not out – which I achieved last year and Dave Hamilton made it earlier this month.
It seems a lifetime away since we first went across the sea to Ireland to play so many wonderful courses and to be bewildered by the loveable Tim McGuinnis! They were great trips which, I’m sure, are as vivid in your memory as they are in mine.
Congrats on your 80th – and keep the swing going!

Mike McDonnell said: “Congratulations from an old Bristol campaigner (1959-61) to another on reaching your 80th. What kept you? I’m already 82. I have many happy memories of my days as a lodger in Lower Redland Road. I used to play my landlord for the rent at Henbury (without success).
So, I left town and got a job as a golf writer on the Daily Mail (but not before meeting Margaret the Evening World copy taker who became – and still is – my wife. Keep your head down.”

David Birtill PGA North, added:”I first met Peter during a facility trip to Ireland in 1991 and thereafter we always kept in touch.
“We had similar career backgrounds so there was much in common, Peter being based in Bristol and I in Manchester. In addition to my daily newspaper role I was also well established as PGA North press officer.
During one of our many Irish jaunts, if my memory is correct, I mentioned to Peter that PGA Wales and South West region were looking for a media man.
Needless to say he got the job and we are still continuing the good work in
our respective regions!
I joined the Association of Golf Writers in 1995 and Peter followed me the following year.

Rob Perkins said: “As sports editor at The Bristol Post I was acutely aware of the reputation that Peter had when he was in the chair.
“But although I knew he was a well-respected, knowledgeable and trusted journalist, I never really appreciated to what esteem he was held, by not only fellow journalists, but also the sportsmen and women with whom he came into contact.
“That was brought home to me clearly at golf day at Burnham & Berrow where many former footballers, cricketers and rugby players turned up – and there was really only one person they wanted to talk to and it was Peter.
They all spoke with one voice when it came to his integrity both as a person and a journalist.”

Norman Dabell said: “Congratulations on cracking the 80 spot Godspell. It’s been a long time since we took those Guinness Road Trips. Happy and fond memories. Have a great birthday and many more of them. All the very best.”

Finally, Mitchell Platts added: “I understand that champagne will be flowing at Farrington Park today which I trust is to celebrate 22 years as a member of the Association of Golf Writers not to mention the 16th Anniversary of you joining a very exclusive club as a winner of the AGW Race to Wentworth – Etiqus Golfer of the Year – oh and something to do with a  number that we all set out to break to prove we can play the grand old game.
Congratulations on becoming an Octogenarian and I wish you continues good health and great times for the future.”